Please get into groups and discuss your responses to question that corresponds to group number. Once finished, draw your response on the board:

Keep the following questions in mind as you read Hamlet, Act 3, Scenes 1-2. The questions are designed to guide your reading practices and our class discussions. You are not required to provide formal answers in class or online.

Why haven’t Rosencrantz an Guildenstern been able to figure out the cause of Hamlet’s “turbulent and dangerous lunacy” (3.1.4) by the start of Act 3?

Why do you think Claudius asks Gertrude to leave he and Polonius alone to observe Hamlet’s interaction with Ophelia (“seeing unseen” (3.1.32))?

Does Hamlet know that Claudius and Polonius can hear him? What do you think of Hamlet delivering this speech to Ophelia?

Are there other questions besides, life or not life? Anything else worth asking? Is there anything else, “between all the two’s one likes” (xvii)?

What are some of the bad things that a person would escape if the church had not outlawed suicide?

Ultimately, what stops people from killing themselves, “And makes us rather bear those ills we have/Than fly to others that we know not of” (3.1.80-1)?

Beyond Killing ourselves, what does “conscience” (3.1.82) also stop us from doing and/or turn us into?

How does Hamlet react when he first sees Ophelia? How does his reaction compare with the introspective speech that precedes her entrance?

Adrian Lester as Hamlet: ‘To be or not to be’ | Shakespeare Solos

How does Hamlet respond to Ophelia when she attempts to return the letters he gave her, “My lord, I have remembrances of yours/That I have longed to redeliver/I pray you now take them” (3.1.92-4)?

Is Hamlet’s response to Ophelia part of his act, his “antic disposition” or is he sincere? Does Hamlet know that Claudius and Polonius are watch their interaction? How does it change the scene if a director decides to stage 3.1 so that Hamlet knows he is being watched?

How does Claudius react to what he sees transpire between Ophelia and Hamlet?

What direction does Hamlet give the players?

How well does The Mousetrap represent the events that occurred prior to the start of Hamlet?

Here’s a link to the David Tennant, Royal Shakespeare, 2008 Hamlet

The Mousetrap sequence is 74-80 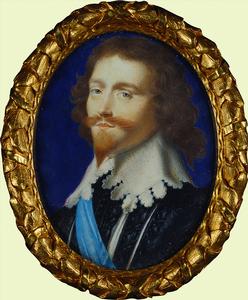 What does Claudius plan to do with Hamlet after he watches the play?

Why do you think that Rosencrantz and Guildenstern agree to take Hamlet to England?

Why does Polonius plan to hide behind the “arras” (3.3.28) in Gertrude’s closet?

Why is Caludius incapable of asking for forgiveness (3.3.53-6)? What’s the difference between heaven and earth in Claudius’s estimation (3.3.60-4)?

What stops Hamlet from killing Claudius at the end of 3.3?

How does Hamlet plan to approach Gertrude (3.2375-89), and does he follow through on his plan?

What do the repetitions at the start of the chamber sequence establish about Hamlet and Gertrude’s relationship (3.4.4-13)? How does this exchange echo their initial exchange at 1.2.72-5?

Do you think that Hamlet will really kill his own mother at 3.4.20?

Do you think that Gertrude knows that Claudius killed Old Hamlet? Why/why not?

What visual representations does Hamlet use to compare his father and uncle and chasten his mother for her marriage (3.4.51-70)?

Why does the ghost of Old Hamlet appear in this scene?

What does the Ghost ask Hamlet to do?

Do not forget! This isitation

Is but to whet thy almost blunted purpose.

But look, amazement on thy mother sits!

O step between her and her fighting soul.

What does Hamlet plan to do with Polonius’s body?

What complications does the mother pose to father-son relationships?

How does Gertrude obliterate or challenge the memory of the heroic father?

Does Hamlet become more like Claudius, as he forgets and/or becomes less like the father figure he idealizes?

Why should the first mother powerfully present in Shakespeare since the period of his earliest works be portrayed as adulterous?

What is Gertrude’s chief crime?

How does the Gertrude of Hamlet’s imagination differ from the character in her own words?

Does Gertrude “enact every son’s scenario of the good mother, i.e. choosing his interests over her husband’s” (15)?

Once I’ve sorted you into groups, analyze the image below according to the prompt assigned your group, and be prepared to discuss your response with the class.

What is the purpose of the poster below? Describe 2-3 ways the designer uses organization to achieve his/her purpose.

What is the purpose of the poster below? Describe 2-3 ways the designer uses contrast to achieve his/her purpose. 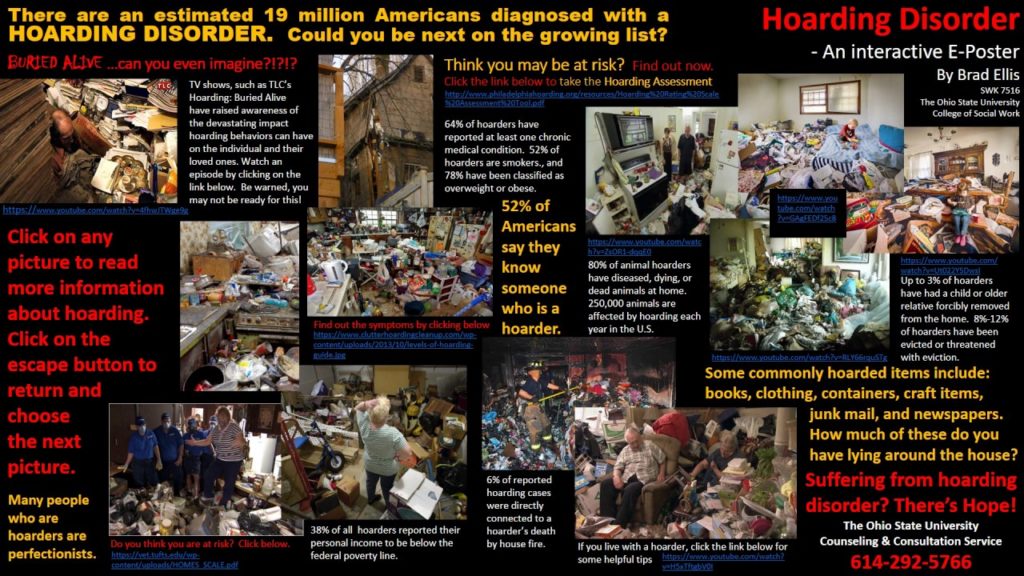 What is the purpose of the poster below?Describe 2-3 ways the designer uses proximity to achieve his/her purpose. 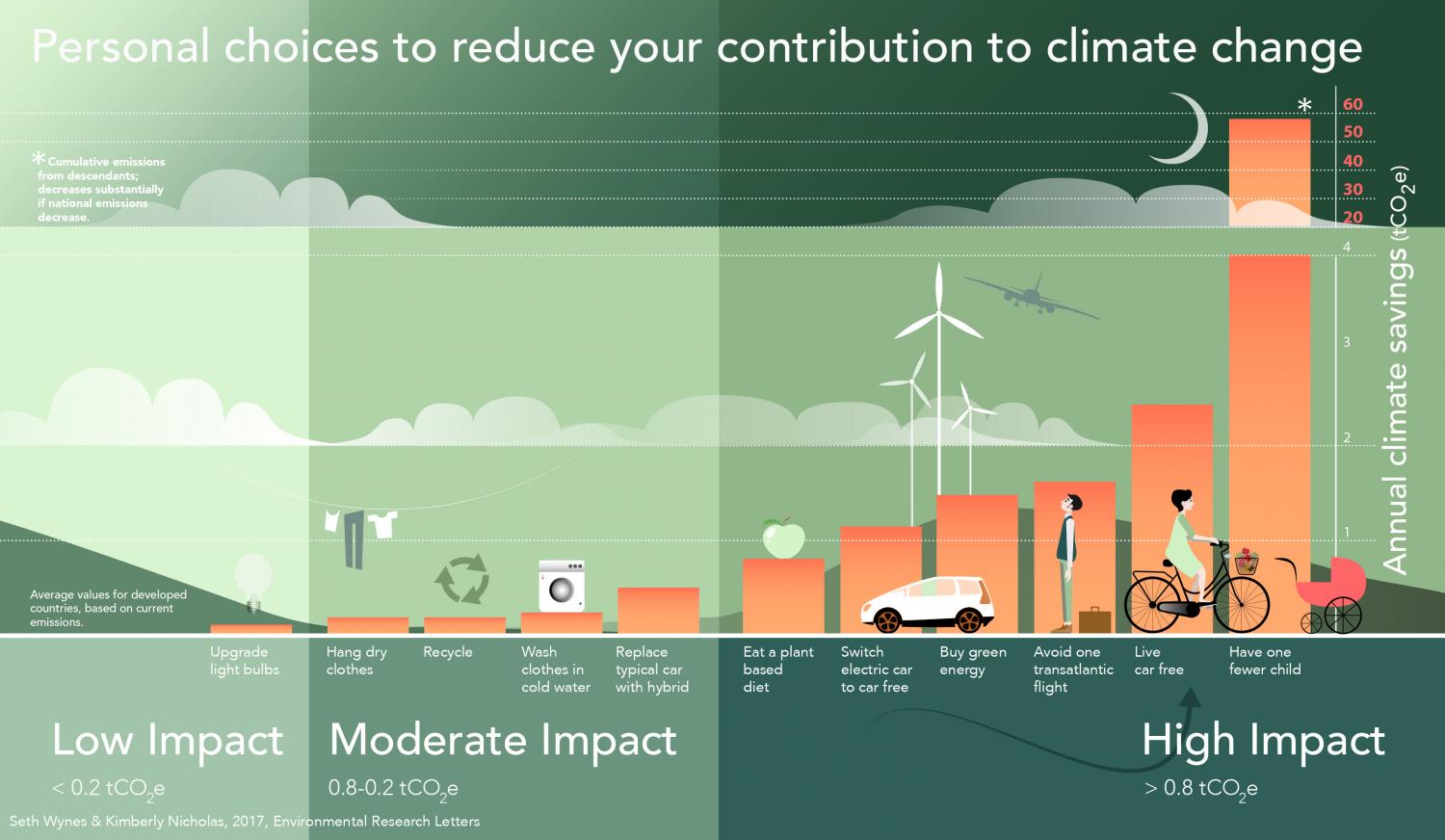 What is the purpose of the poster below?Describe 2-3 ways the designer uses alignment to achieve his/her purpose. 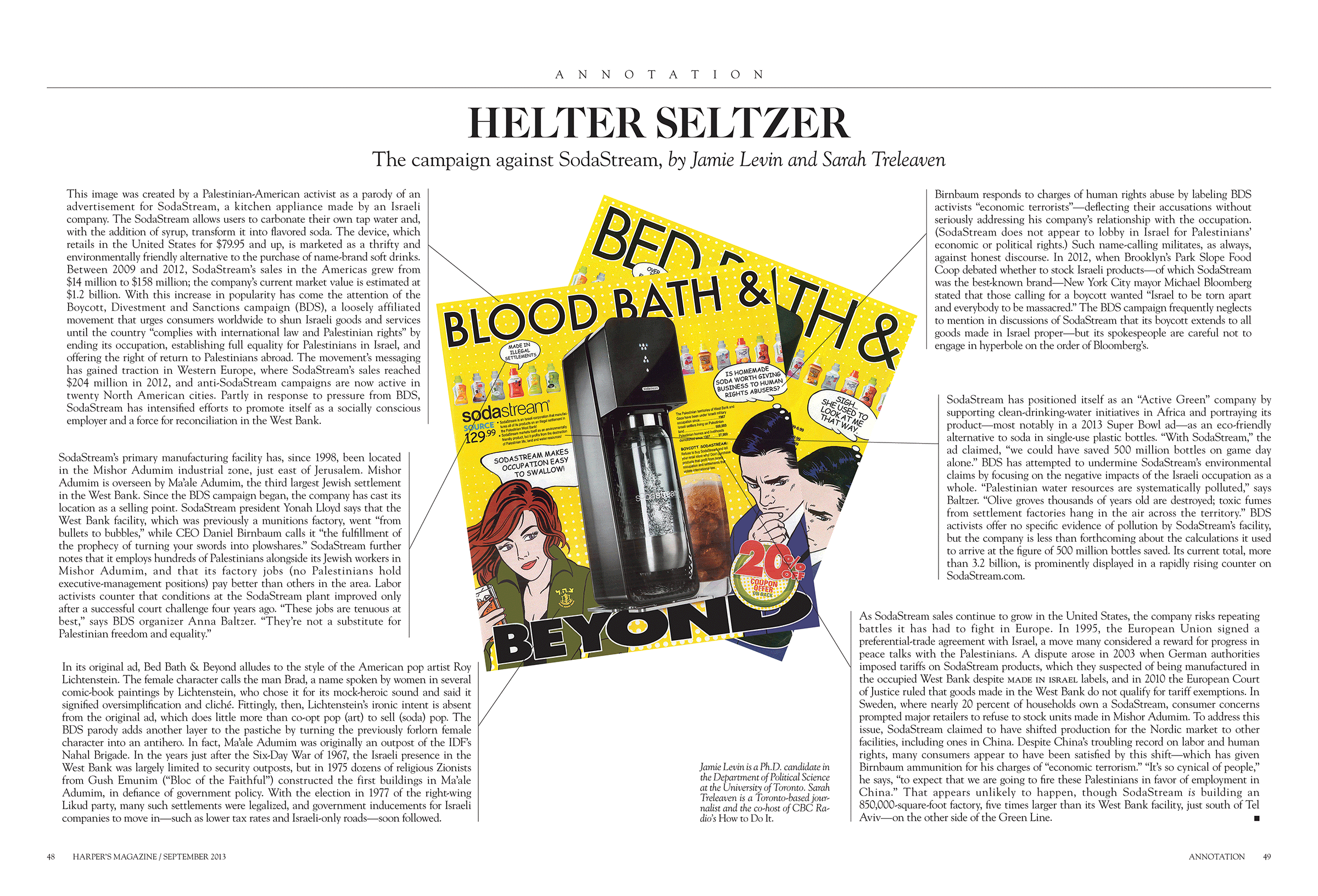 Keep the following questions in mind as you read Jane Bennett’s “Powers of Hoard,” (237-58) The questions are designed to guide your reading practices and our class discussions. You are not required to provide formal answers in class or online.

1. According to Jane Bennett, how have other philosophers engaged with stuff as a “vital force” (237)? What do all the explanations about how the material world interacts have in common? What does Bennett’s project fit into the history of philosophy that she cites?

3. How does Bennett define rhetoric, or what is the relationship between things and words (242)?

5. How does Bennett’s project relate to Herring’s?

6. What two maxims, i.e. rules of conduct, does Bennett provide to help “guide our encounters” hoarders/hoards that is more than simply pathological (244)?

7. According to Bennett, what is a hoarder? Who decides? What distinguishes a hoarder from other types of collectors (245). What determines these distinctions?

8. To what extent are all of “us” hoarders according to Bennett and why? What conditions make pathological overconsumption possible? Why does she classify the Great Pacific Garbage Patch or the Internet as hoards? Do you agree–why/why not?

9. According to the A&E TV show Hoarders, why do people amass so much stuff that they threaten their lives?

10. According to Bennett, why does stuff “‘overwhelm'” hoarders (252)? How does she agree and how does she disagree with psychological explanations for hoarding?

11. Is hoarding a response to loss? What other “comforts” does hoarding provide?

12. What does Bennett mean when she says, “Any extant contour or boundary of entityhood is always subject to change; bodies are essentially incorporeal. This applies to the hoarded object as well as the hoarder’s body: each bears the imprint of the others” (254). What are some examples she gives of this imvorporeality?

13. What does Bennett mean when she says, “In an act of sympathy and self-recognition, the hoard accesses the it-stuff within the hoarder herself and forms bonds therein” (258-9)? What are some examples of what Bennett calls, “Inorganic sympathy”?

14. Do hoarders, like connoisseurs, “escape the oppressive world of marketed goods” (260)?

15. In the final section, Bennett explains, “It is not normal today to think of ‘inanimate objects’ as possessing a lively capacity to do things to us and with us, although it is quite normal to experience them as such” (263). If we do experience vibrant matter or lively objects, think about junk drawers, why is there a “tendency to forget thing-power, to overlook the creative contributions of nonhumans and underhear their calls” (263)?

16. Do you agree with Bennett when she argues, in the final paragraph of the chapter that “Each of these sites (hoarding, but also poetry, archeological digs, religious communities, and schizophrenia) might shed light on the role that a not-quite human form of effectivity might be playing in maintaining the over-consumptive, ecologically disastrous society that I (and we) live in” (269)?

Keep the following questions in mind as you read Scott Herring’s, “Pathological Collectables,” (51-84). The questions are designed to guide your reading practices and our class discussions. You are not required to provide formal answers in class or online.

1. According to Herring why did the cookie jars in Andy Warhol’s effects cause a “minor object panic” (51)?

2. Why do you think that the sale of Warhol’s effects elicited such a wide spread reaction from mainstream news outlets such as Time, The New York Times, and Newsweek, as well as trade publications such as Art and Auction? 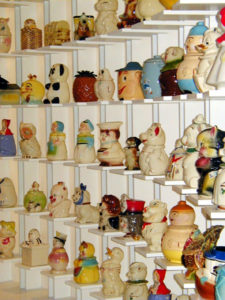 3. How does the DSM-5, and psychologist David Greenburg et. al., distinguish “‘normal collecting’” from ‘pathological collecting, or hoarding’” (52-3)? Why might this distinction matter?

4. What subtle linguistic distinction does Herring make by saying, “Shifting the tenor of hoarding as pathological collecting to hoarding as a non-normative engagement with collectables” (53) open up for him?

5. Spend a minute looking at Figure 2.1. (54-5): what sorts of objects are foregrounded? What sorts of objects recede into the background? What do you notice about the ways in which the objects in the picture are arranged? What are some points of contrast/compliment? Who’s the audience for this photo: academics, collectors, people who work at that warehouse? Compare Figure 1.1. to Figure 2.2. (59).

6. When did garage and yard sales become a fixture of US suburban life? What other changes were going in post WWII US that changed the ways that people thought about what can and should count as collectable?

7. What’s the difference between a “collectable” and an “antique”?

8. According to Herring, how did Ralph and Terry Kovel’s “half century of published work” (58) help to facilitate the “institutionalization of collectible goods across the US—the ‘normal collecting’ later cited by scientists I their efforts to further refine hoarding as mental disease” (59)?

9. How does Herring’s “concise history of collectibles relate to the widening divide between normal collecting and pathological hoarders” (60)?

10. How does hoarding “haunt” collectable culture—both the collectors and the things they collect?

11. What motivates a person to become a hoarder?

12. What is unusual about the article Jane Glick and David A. Halperin wrote for Addictive Disorders?

13. What critiques have accounts of collecting/hoarding in material culture studies leveled at the collector/hoarder distinction imposed by psychology research/diagnosis?

14. How does The Andy Warhol Collection, the catalog of stuff from the Warhol estate that Sotheby auctioned, “remain a contradictory testament to modern object taxonomy” (69)?

15. How did the Sotheby’s publication of the auction catalogue, The Andy Warhol Collection, “reinforce the notion that Andy” was a mad collector, hoarder, and a pack-rat? OR, why do collection guides/catalogues provide a reaction readers that is directly opposite from the one they intend?

16. What are the Warhol Time Capsules (TC’s)? How do the TC’s “augment the anxieties that attached to Warhol’s effects during Sotheby’s estate sale?

Time Capsules at the Warhol Museum in Pittsburg