Keep the following questions in mind as you read Hamlet, Act 4, Scenes 5-7. The questions are designed to guide your reading practices and our class discussions. You are not required to provide formal answers in class or online.

Why does Ophelia want to speak with Gertrude and why does Gertrude initially refuse?

According to the Gentleman (4.5.4-16), How has Ophelia changed since we last saw her and what has caused the change?

How do Gertrude and Claudius respond to Laertes and he political threat he poses?

How does Laertes respond to Ophelia when he meets her for the first time after returning to Denmark?

There’s rosemary; that’s for remembrance. Pray you, love, remember. And there is pansies; that’s for thoughts.

A document in madness, thoughts and remembrance fitted.

There’s fennel for you, and columbines. There’s rue for you, and here’s some for me; we may call it herb of grace o’Sundays. You may wear your rue with a difference. There’s a daisy. I would give you some violets, but they withered all when my father died. They say ‘a made a good end.
[She sings.]
For bonny sweet Robin is all my joy.

Thought and afflictions, passion, hell itself
She turns to favor and to prettiness.

What does Hamlet’s letter ask Horatio to do for the Sailors?
According to the letter he sent Horatio, what happened to Hamlet on his way to England?
What has happened to Rozencrantz and Guildentstern?

According to his confession to Laertes (4.7.10-25), why hasn’t Claudius killed Hamlet?
What reasons does Laertes think he has to revenge himself against Hamlet?
What does Hamlet say in his letter to Claudius (4.7.43-6), and how does Claudius respond? What’s your assessment of Claudius’s interpretation of the letter?
Describe Claudius’s plan to kill Hamlet (4.7.125-137).
According to Gertrude’s report, how did Ophelia die (4.7.164-180)?
How does Laertes react?

One woe doth tread upon another’s heel,
So fast they follow. Your sister’s drowned, Laertes.

There is a willow grows askant the brook
That shows his hoary leaves in the glassy stream.
Therewith fantastic garlands did she make
Of crowflowers, nettles, daisies, and long purples,
That liberal shepherds give a grosser name,
But our cull-cold maids do dead men’s fingers call them.
There on the pendent boughs her crownet weeds
Clamb’ring to hang, an envious sliver broke,
When down her weedy trophies and herself
Fell in the weeping brook. Her clothes spread wide,
And mermaid-like awhile they bore her up,
Which time she chanted snatches of old lauds,
As one incapable of her own distress,
Or like a creature native and endued
Unto that element. But long it could not be
Till that her garments, heavy with their drink,
Pulled the poor wretch from her melodious lay
To muddy death.

Keep the following questions in mind as you read Hamlet, Act 4, Scenes 1-4. The questions are designed to guide your reading practices and our class discussions. You are not required to provide formal answers in class or online.

What does Claudius want Gertrude to “translate” for him (4.1.2)?

Does Gertrude fulfill her promise to Hamlet?

What does Claudius mean when he says that he must “Both countenance and excuse” (4.1.32) Polonius’s murder?

What stops Claudius from putting “the strong law,” (4.3.3) on Hamlet? In other words, what holds Claudius back from punishing Hamlet to the greatest extent of the of which he is the final judge/jury?

How does Hamlet respond when asked where he has deposited Polonius’s body?

What do you make of Hamlet’s ecology: “Your worm is your only emperor for diet. We fat all creatures else to fat us, and we fat ourselves for maggots. Your fat king and your lean beggar is but variable service, two dishes but to one table. That’s the end” (4.3.21-24)?

According to Hamlet, how does “nature” threaten political systems from the inside?

What’s going to happen to Hamlet after R & G deliver Claudius’s letter? Why does Claudius trust the King of England will do as he commands?

Where are Fortinbras and his army, who Hamlet sees cross through Denmark, going to attack?

What do you make of the Captain’s explanation of the war they are all about to fight:

Truly to speak, and with no addition,

We go to gain a little patch of ground

That hath in it no profit but the name.

To pay five ducats—five—I would not farm it,

Nor will it yield to Norway or the Pole

How does Hamlet respond to the sight of Fortinbras marching across Denmark to attack Poland?

Is his response in proportion to the event?

How does Hamlet interpret the political event he witnesses personally? Does his response mark a change in his revenge plans?

The speech beginning, “How all occasions do inform against me” (4.4.31-65) is not included in Shakespeare’s First Folio (1623), or any Folio editions. How does the inclusion (in Q2)/exclusion of the speech change the way we read and/or interpret Hamlet?

“How all occasions” in Q2 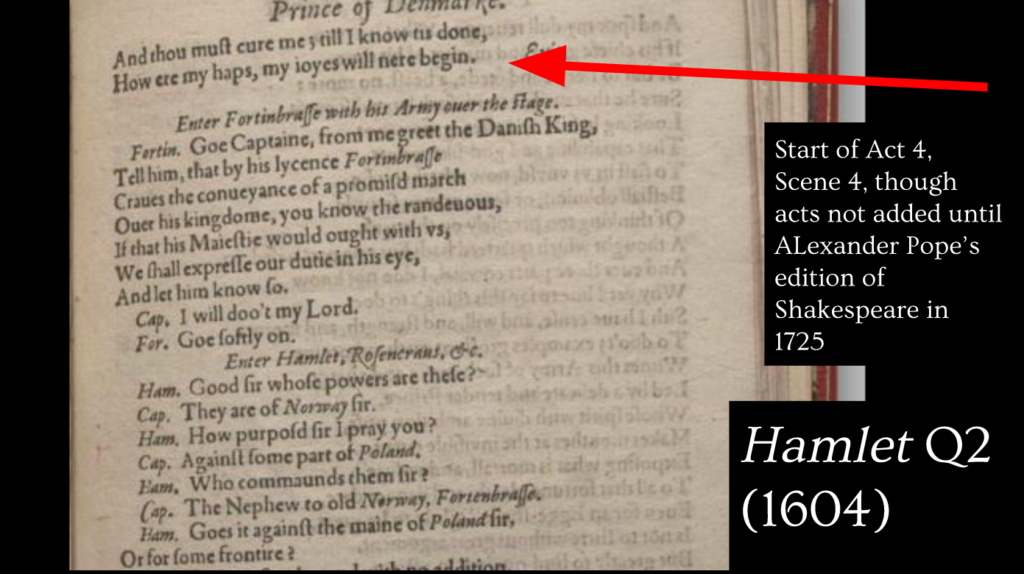 “How all occasions” omission in F1 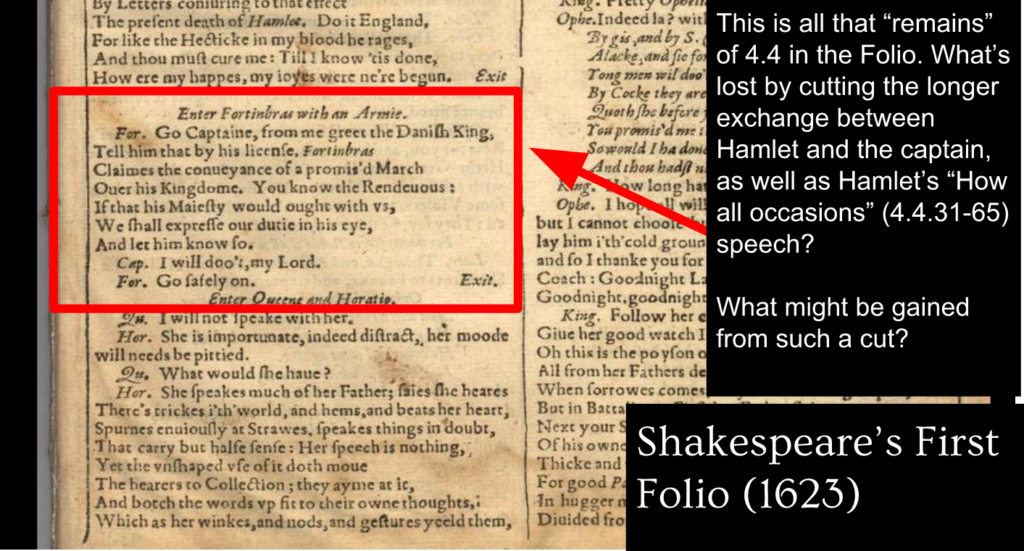 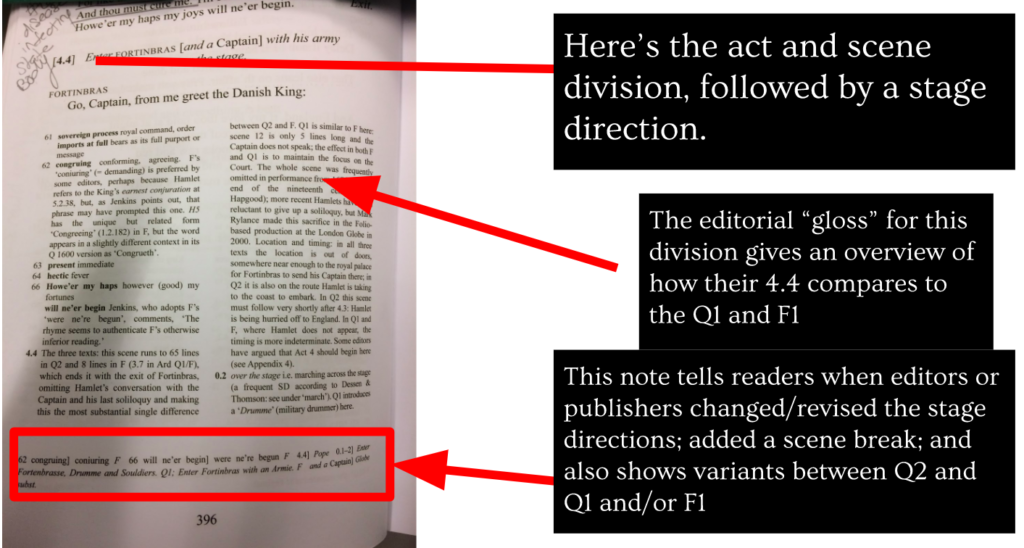